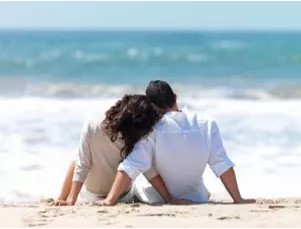 Have you ever been in a relationship where it begins so beautifully, where you thought that you were made for each other and that you had found your soul mate? As time passed, maybe months, or years depending on your relationship, did you find it became stale? Communication between the two of you became a challenge and it seemed like he or she was speaking Swahili compared to your perfectly understandable English?

Well it is very possible that you are speaking different love languages!

Let’s look at a friend of a friend of mine, Julie, a part time nurse. She was recently married to Nick who worked long hours as an investment banker. One evening, Julie cooked a beautiful meal for Nick. She set the table with flowers, chose some lovely wine, perfectly matched for the meal. Nick came home with a friendly ‘Hi Babe, missed you today!’ as he stripped his clothes off as he walked through the door, leaving a trail of suit jacket and tie behind him. He chatted happily about his day as he wolfed down the dinner. Julie felt that her special efforts went unappreciated so she became angry and screamed abuse at Nick of how he just drops his clothes everywhere, doesn’t help her yada yada!! Nick was astounded and quickly took refuse in the bedroom wondering what had just happened.

The issue was that Julie’s primary love language is acts of service while Nick’s is words of affirmation.

Not understanding this about each other was enough to cause disharmony and lack of communication. Julie could only see the trail of clothes, the mess on the table due to the wolfed down food and thought Nick did not love her because he did not appreciate her acts of service which is how she shows her love. All Nick could hear was abuse about how useless he was which violated his primary love language of words of affirmation, so he began to believe that Julie did not really love him.

Now ask yourself has this kind of thing ever happened to you? Well it does not have to if you understand about the five love languages.

Gary Chapman wrote the book ‘The 5 Love Languages’ and it a highly recommended read!

So what happened to Julie and Nick? I asked my friend to recommend the book to them and I am still waiting to find out the outcome! Watch this space!